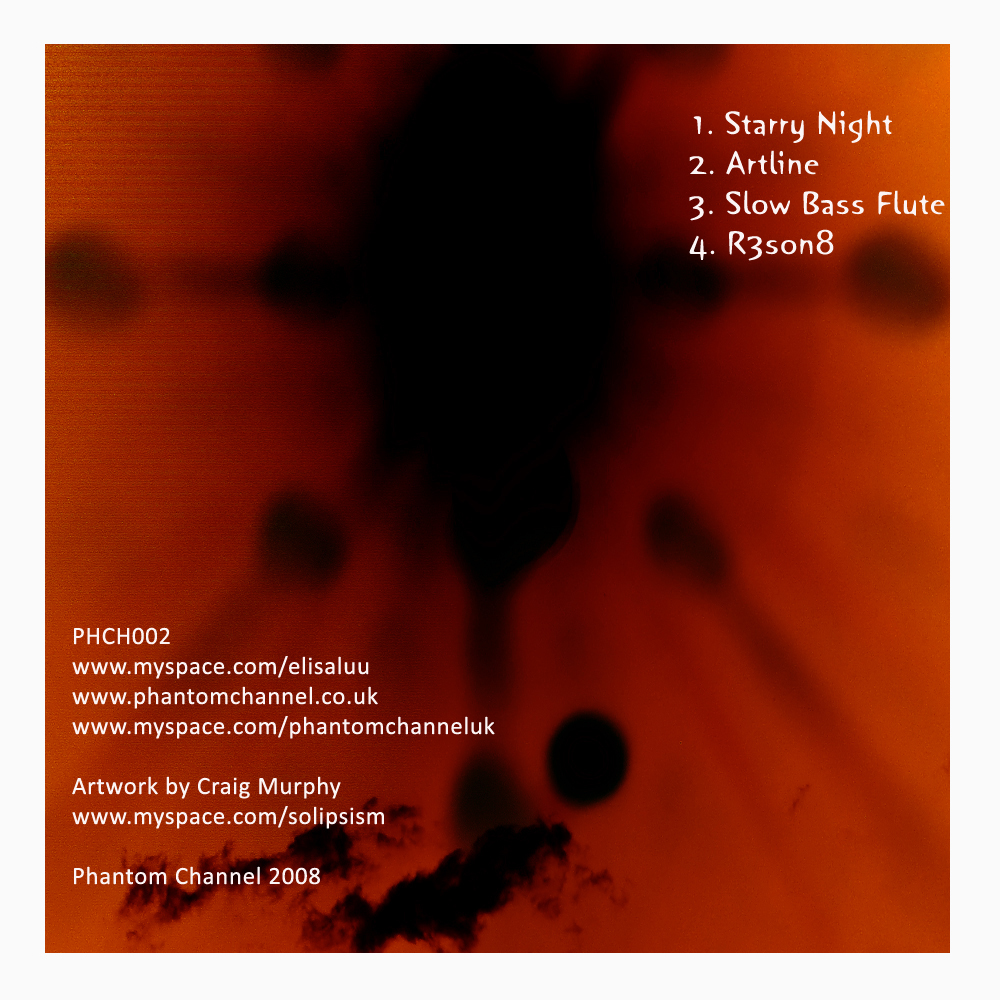 Phantom Channel's first foray into the realm of solo releases brings Elisabetta Luciani to the spotlight....

Recording as Elisa Luu, Elisabetta is the Rome based composer behind these 4 tracks which so delicately fuse flute, saxophone and guitar with computer generated effects providing a spectrum of hopeful, sensitive and subtle melodies.

Working alone Luciani creates a unique hybrid of mostly instrumental electronic music with subtle elements of jazz. The final track 'Starry Night' features treated vocals by Chinese singer MousoN which perfectly use her breathy tones purely as an instrument rather than a device for language.

Reviewer: Micky1967 - favoritefavoritefavoritefavoritefavorite - April 6, 2009
Subject: Four-Track Shoegazer MP3 EP from Elisa Luu
There is a balance of songness and sound, of an experimentalist’s emphasis on texture and a composer’s on tone, that makes Elisa Luu’s Floating Sounds (Phantom Channel) one of the most immediately awarding and arresting netlabel releases of the year thus far.

The track sure to garner the lion’s share of initial listening is “Starry Night” (MP3), which mixes in fragments of Luu’s softly employed voice, tweaking it with bits of layering and stereo play, breaking it into syllables, but eventually allowing full phrases to be heard. In the world of netlabels and, more broadly, of electronic music, voices are in short supply, more often appearing as raw source material (think Scanner or Alessandro Bosetti, and countless other field-recording enthusiasts) than as center-stage participants alongside the instrumental elements, as they might in a traditional band setting. Luu finds a point of continuity between a pop song and the cut-up manner of much electronic music by emphasizing vowels over consonants, and never letting the seams of her sampling show.

There’s a shoegazer quality to the results, and the lush, dreamy quality of “Starry Night” should get new listeners to check out the three other, vocal-free tracks on Floating Sounds. All four tracks let small melodies proceed, often abetted by tiny multi-channel efforts in minimalist production touches. Generally speaking, these melodies don’t so much develop as they do repeat through a variety of different settings. There are glistening, cloud-like guitar patterns against pneumatic percussion on “Arteline”(MP3), and a more immediately recognizable six-string on “R3Son8″ (MP3), heard amid a bed of synths. The title subject of “Slow Bass Flute” (MP3) is never self-evident in the track, which proceeds like a sweet little bauble. Likely it’s simply been transformed beyond recognition.

More on Luu (aka Rome, Italy-based Elisabetta Luciani) at her myspace.com/elisaluu page, and at the releasing netlabel, phantomchannel.co.uk.